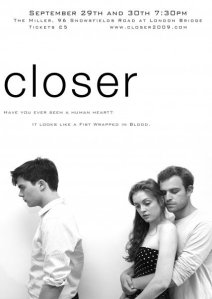 Notice in pre-film research similarity between promotional one sheetposter for Brothers and Patrick Marber play self co-directed last year starring flatmate Tom (see above, far right). Suddenly suspect possible Sheridan rip-off of low-level play productions. Decide against notion but instantly reassess and find self drawn back to original conclusion. Wonder why Sheridan forwent sending cheque for royalties. Wish self could find other play poster that inverts displayed play poster to left to truly get point across. Suffer Facebook search fail but confident that point stands.

Find self bemused by opening section as am expected to believe Jake Gyllenhaal ex-inmate and Tobey Maguire army captain in Afghanistan. Unsurprised as Jim Sheridan capable of casting Fifty Cent in lead role. Hate Fifty Cent in every way imaginable. Used to like Eminem but now hate Eminem as responsible for Fifty Cent career. Potentially willing to hate Jim Sheridan as well for making Get Rich or Die Tryin’ as disapprove of use of apostrophes replacing letters in film titles. Realise self in no position to judge as still drinkin’ White Ace.

Realise that Sam Shepard not writing plays about western American culture at current time as too busy being disappointed with son Donnie Darko. However, playwright certainly proud of country-serving Spiderman. Realise that film of high quality and should watch when unencumbered by severe drink problem. Remember interview with playwright wherein playwright divulged recent rehabilitation and realise that self should take leaf from playwright’s book of life. Pass out.

Wake at 8am as have rehearsal at 10am for Oscar Wilde rehearsed readthrough. Practise posh accent in shower before coffee and cigarette and Brothers. Terrified by Spiderman’s anger upon returning from captivity in war-torn desert as he thinks Donnie Darko has been sleeping with wife Natalie Portman. Want to let Spiderman know that all they did was kiss and that was due to them thinking Spiderman was dead. Don’t realise what all fuss over as obvious from filmic history that Portman has been kissing Clive Owen and Spiderman has been kissing Mary Jane, whilst Donnie has been busy beating people up in Persia.

Find self relating to Spiderman rage after receiving text from readthrough director pushing rehearsal back to 12pm making early rise redundant. Probably will not destroy kitchen like Spiderman does, nor hold gun and point at younger brother Donnie. Realise that sardonic nature of film blog inappropriate because Spiderman suffering genuine post-war trauma, leading to stand-off between Spiderman, Donnie, Portman and cops. Find self genuinely riveted by unpredictability of Spiderman rage.

Find self taken back unwillingly to end of The Wolfman when Spiderman delivers closing voiceover philosophy regarding post-war stress. Sheridan film hilariously better in contrast. Drunk blog writer in no position to critique film as script content analyses complex issues blog creator unfamiliar with. Blog creator pleased at sobriety for screening as Sheridan film deserving of attention. End up grateful to readthrough director as have had chance to finish film rather than walk to rehearsal at old university. Realise that now have to leave in order to make rehearsal on time. Decide to leave Spiderman rage at home and practise posh accent. Hope not to bump into Fifty Cent.