One Night in Turin 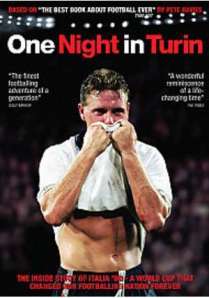 Wake at 10.30am due to persistent knocking on bedroom door by non-flatmate James. Previous night spent drinking until 4am with James in Aldgate and Southwark resulting in walk home with screaming James. Spent remainder of evening attempting to pacify uncontrollable screenwriter James with little success. Endure intensely strong coffee and numerous cigarettes in attempt to liven up and subdue residual alcohol affects as long football-based day planned. Walk to Oxford Street with non-flatmate-screenwriter-asthma-sufferer James discussing future film projects. Wave goodbye to James and secure copy of BluRay edition of heavily-advertised-in-underground-stations-film One Night in Turin using HMV voucher left over from Christmas. Ride tube-based subterranean vehicle to Walthamstow Central, outer-city village home of self’ parents.

Insist on increasingly wealthy parents purchasing self various fried and refrigerated goods. Return to teenage home to bathe in football fiesta with father. Insert documentary disc into BluRay player. Have trouble navigating self through various remote controls usually operated by self father but eventually realise that insertion of disc to BluRay player similar to insertion of disc to laptop. Line up fried food, salt, Diet Coke (novelty replacement for strong cider) and napkins in excited preparation.

Film begins and feel as if watching documentary directed by Nick Love (The Firm remake, The Football Factory). Lots of slow motion shots of white footballs hitting white nets intercut with archive footage of Italia ’90 which at crucial moments always has annoying lines of empty bar chart graph at bottom and left of screen. Find self continually shocked by happenings that thought self was aware of but wasn’t: how hated Bobby Robson (R.I.P) was by press, how fascinated country was by Paul Gascoigne, how riotous English fans were in reaction to horrible Tory government and so forth. Enjoy history lesson lots despite enjoying more play-by-play unknown Clive Owen film An Evening with Gary Lineker, which in no small way defined self childhood.

Film ends after famed Waddle penalty mishap. Watching close-up Waddle leads self to believe for sure that footballer intended to miss penalty purposefully. Forgive footballer as event two decades in past. Initiate applause which self father doesn’t join in with. Consider possibility that wound still sore with self father and that sarcasm probably not appreciated at this stage.

Fill interim between film and football match with 50 Most Shocking World Cup Moments. Realise that this is only saving grace of last film watched The Men Who Stare at Goats. Enjoy Peter Crouch acting as foolish as self imagines him in real life. Watch England opening game. Debate whether or not to start World Cup blog. Decide that additional blog would require too much knowledge of football and take up too much extra time. Pack bag with parentally sponsored drinkable goods and set off on pilgrimage to self flat and leave teenage home. Chicken in stomach joined by bottle of wine and three beers. Flatmate Johnny awake and hassled by romantic concerns. Feel desirous towards element of competition between us due to day of sport. Decide against notion as flatmate Johnny trained in karate. Eventually put self to bed with traditional English musician Miles Davis playing jazz. Pleased at replacement for screaming that accompanied previous evening.