Wake at 10.30am and realise that it has been week since last confessional blog entry. In spite of roller coaster weekend featuring perverse hotel hijinks, drunken games of rounders and ninety minute walk along London Cycle Superhighway number seven, self still found time to watch Australia with non-flatmates life-giving parents and take in follow-up-feature-based-on-Hugh-Jackman-obsession screening of early-Wolverine-outing-hacker-film Swordfish. Unable to blog about former film as even though film in high definition, self too fat with kebab to keep eyes open for very long. Unable to blog about latter film as even though film not in high definition and self not fat with kebab, self too trashed on cider to recollect emotional response.

Initiate routine in newly cleaned kitchen. Wonder why kitchen so clean. Realise self made agreement with flatmate Johnny that if flatmate Johnny cleaned kitchen self would clean bathroom. Self obviously tipsy when deal struck but self devoid of excuses as flat empty as flatmate Johnny at work and flatmate Tom AWL in countryside to pen dissertation. Self wishes self had dissertation to write. Self instead has completely free day. Self aborts routine as cleaning body pointless in light of state of bathroom. Self strips down to essentials and initiates onslaught.

Requiring break from quiet licking of year worth of self and flatmate pubis from bathroom floor, self returns to room for cigarette and episode two of Mad Men Season Four. In previous blog posts, self has noted vague interest in fonts. Knowing that typeface Helvetica should have been invented at current point in 60s-based-show-about-advertising-men, self has been keeping keen eye on decor of advertising offices featured in programme. Best orgasm of life occurs when self carries out textual analysis of every single frame of show and discovers this:

Choking on cigarette solved by leaving room, entering bathroom and gulping down shot of domestic bleach. Calmed, self closes out episode thoroughly impressed. 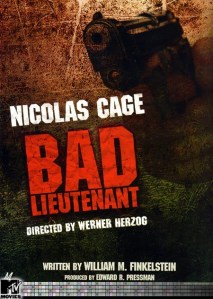 Pleased to see Val Kilmer looking thinner since Deja Vu. Hurried scroll through Val Kilmer filmography reveals Val Kilmer fond of appearing in films self has never heard of. Val Kilmer potentially responsible for self viewing habits for next month. Val Kilmer wants to stop Nicolas Cage arresting murderer at end of film. Val Kilmer jealous of Nicolas Cage career and so trying to be worse lieutenant. Nicolas Cage not happy. Potential straight-to-DVD spin off for Val Kilmer: From Bad to Worse Lieutenant.

Film ends with bad lieutenant being promoted to bad captain. Nicolas Cage apparently sober. Self annoyed. Nicolas Cage runs down club goers for hit of crack. Self relieved and impressed. Self feels dirtier than flat bathroom. Fear for self health as self easily influenced by Nicolas Cage. Can’t afford coke. Can afford cider. Cider depressant. Self more likely to become sad lieutenant.